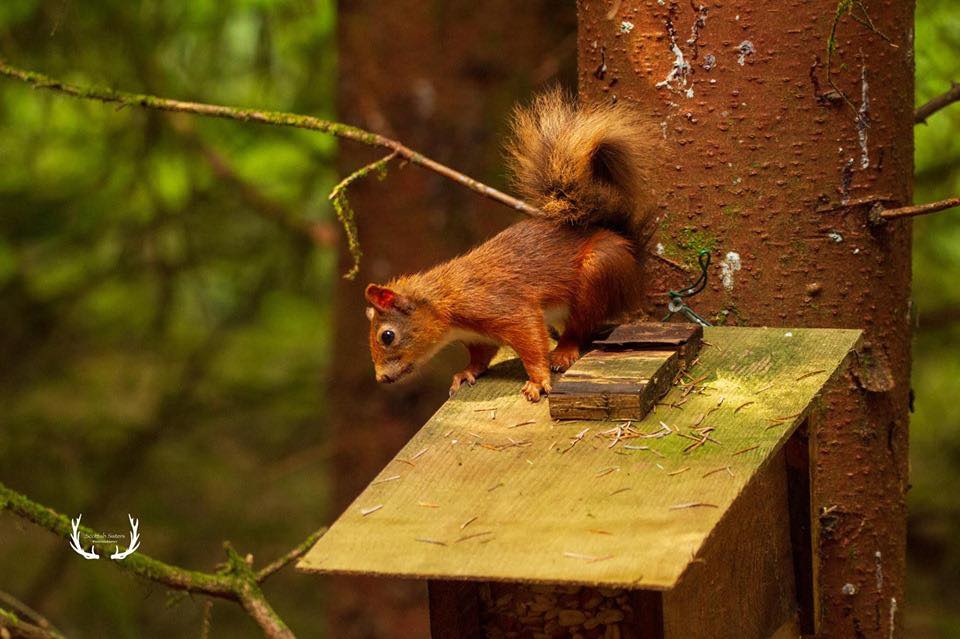 Sipping on my morning brew, I’m often treated to a visit from Bobbin the robin. He arrives in a flurry of wing beats, settles himself on a tap, and scans the area for any tasty morsels. He’ll hop furtively around the bath, then, once he’s noticed my gaze, zip off into the trees to continue on with his busy day.

While staying in the cabins, you can always spot a creature of some sort going about its daily business. From wrens building nests, to speedy red squirrels, often what’s going on within view of the couch is far more entertaining than whatever’s happening in my book.

This abundance of life is no accident, and has taken one hard-working man over a decade to create. An expert in the natural world, he’s built the perfect environment to let all this life flourish.

His name is Brian Patterson (I usually call him Dad), and I was lucky enough to secure an interview with him while he was enjoying a brownie and a cup of tea.

What notable wildlife do we have around the cabins?

“Notably, we also have no grey squirrels in the area. 5 years ago, pine martens were introduced nearby, which are easily able to catch the non-native greys. This has wiped out the greys and allowed the red’s population to recover.”

Pine Marten are a small mammal, about the size of a cat. They’re extremely rare, hunted almost to extinction for their fur and damaging poultry populations. However, a few thousand still remain across Scotland. They are only able to catch young, ill, or very old red squirrels, but the greys are easy pickings. The government has announced plans to try to develop populations across England and Wales to help red squirrels re-establish themselves, but there are still decades of work to be done.

Which are your favourite species/characters?

“The owls. I love that you can hear them, but rarely see them. They can only hunt in the dry because when their wings get wet they make too much noise.”

“The red squirrels are great too. They’re nimble, lightweight and fast through the trees.”

“And of course the hedgehogs.”

Dad is probably the biggest ally hedgehogs have in the area. Last winter, he fed and housed 6 of the prickly little mammals, keeping them safe, warm and well-fed while they hibernated. In the spring, they were all released back into the wild.

Hedgehogs are another species that are in desperate need of our help. Their numbers are thought to have declined from 30 million in the 1950’s, to just 1 million today.  According to Fay Vass, the British Hedgehog Society’s Chief Executive, “The decline of hedgehogs in the UK is comparable to the loss of tigers globally.” With Dad on the case, they’ve definitely got a better hope of survival.

Are there any especially rare/memorable animals you’ve seen?

“One night while Fiona and I were watching tele, we heard a rummaging just outside the glass doors. When we looked over, there was a pine marten with its nose up against the glass! It was fantastic to see so close-up.”

“I once saw a slow worm which was at least 30cm long, with a big, broad back. We sometimes see slow worms around the garden, but this one was by far the biggest ever.”

“A hummingbird moth.” – I had to google to find out exactly what this was, and I was blown away by what I found. Its full name is a hummingbird hawkmoth (Macroglossum stellatarum), and has a wingspan of 50-60mm (2 inches). Its wings produce an audible hum, and allow it to hover in front of flowers to feed, similar to a hummingbird. I had absolutely no idea these animals existed, much less in our garden! What a sight that must have been.

(I’ve included photos of a slow worm and a hummingbird hawkmoth at the bottom for those who are unfamiliar.)

“I saw a kingfisher at our pond, diving in off of the bullrushes.”

“One day, a family of geese made their way down the garden from the top gate. Mum was in the lead, with four or five goslings in-tow. They waddled down to the pond for a swim. Initially, Dad was nowhere to be seen, but he soon came crashing through the trees and bounced onto the grass. I tried to herd them away from the pond down toward the river where I thought they’d be headed, but they were not to be told what to do. They hissed and puffed themselves up, ready for a fight, so I left them alone. They exited through the same gate they arrived.”

Are there any species you’d like to see/encourage that you haven’t yet?

“Adders. Buzzards prey on them, which might be why we haven’t seen any, but I’d love to see them around.”

Dad genuinely is an expert when it comes to the local flora and fauna. A lifetime of research, conservation, and observation has given him a deep understanding of Scottish wildlife. This knowledge has enabled him to create and nurture an extremely diverse ecosystem around the house and cabins. This becomes abundantly clear while sitting on the deck, day or night,  and just listening to the life teaming around you. The wildlife is one of my favourite features of cabin life, and it’s all thanks to our local wildlife expert.

Coming up: part 2 of the interview, where Dad and I discuss the challenges our wildlife are facing, what we do to help, what our readers can do to help, and the resources he finds most useful.

Thanks so much for reading. Part 2 will be with you shortly!