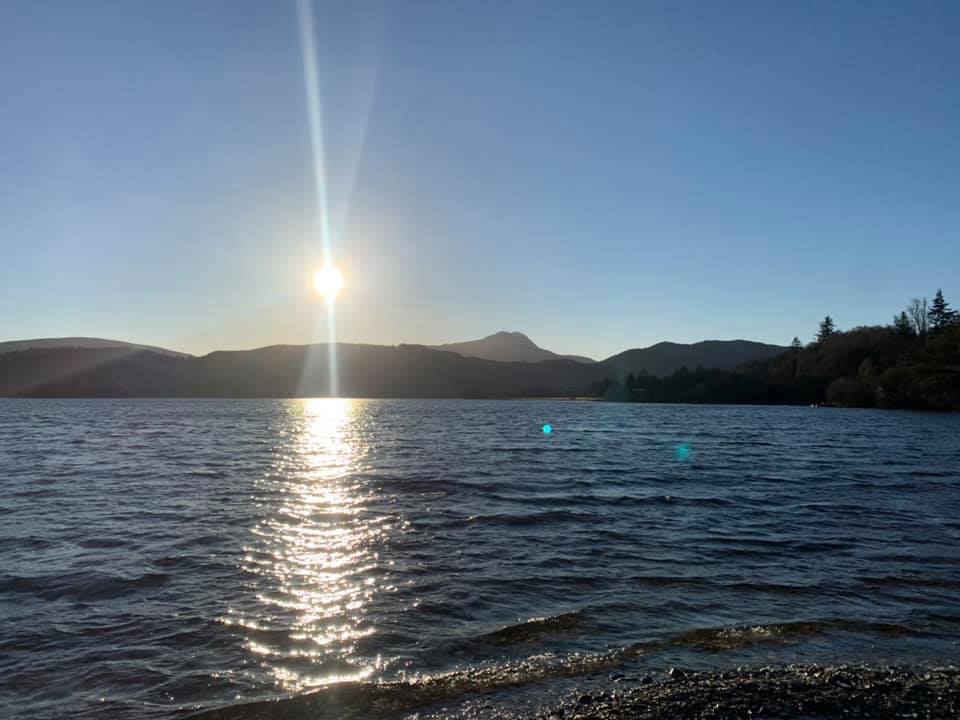 Yesterday was a sunny Sunday, so I took to the hills to go on an adventure.

On the other side of Aberfoyle lies Loch Ard – a beautiful body of water overlooked by Ben Lomond. A road runs along one side of the Loch which will take you some good swimming spots, but I had a different route in mind. I’ve known for many years there’s a bike track on the west side of the Loch, but have never checked it out. So I set off with my book (Stephen King’s 11.22.63), some water, a pack of brazil nuts, and my UE boom speaker, all packed tightly into my trusty backpack.

My bike’s bell has gone missing, so I have to announce myself every time I’m squeezing past a walker on the cycle track. I usually comment on the weather as I pass by and pedal off. Cliche, I know. I wove through the pine forest, enjoying the sights and smells, until I reached a peaceful spot to read my book. I pushed through some bushes, sat down at the lochside, and took a nice deep breath. Time to relax.

I took out my UE boom and shuffled Jimmy Cliff. Scranned some brazil nuts, rehydrated and opened my book. I’ve never read a Stephen King novel before. 11.22.63 is about an English teacher from 2011 who goes back to the 1950’s to stop Lee Harvey Oswald from murdering JFK. If I’m honest I thought it sounded kind of lame, but I’m enjoying it more than any book I’ve read in a long time.

After an hour soaking in the sunshine I set off again. The sun would be behind the hill soon, and I was pretty sure Mum would have Sunday dinner in the oven. I looped around the top of the Loch, waved to a couple of wild swimmers and sped along the road back to Aberfoyle. When I turned into the car park, Strava told me I’d covered 27km. A respectable distance for an adventure. I was right about dinner – a roast pork joint was resting on the Aga.

The Queen Elizabeth Forest Park has 100’s of miles of mountain bike tracks. Aberfoyle has a great shop where you can hire bikes to go on your own adventure. And if you’re looking for somewhere to stay, I might just know a place…