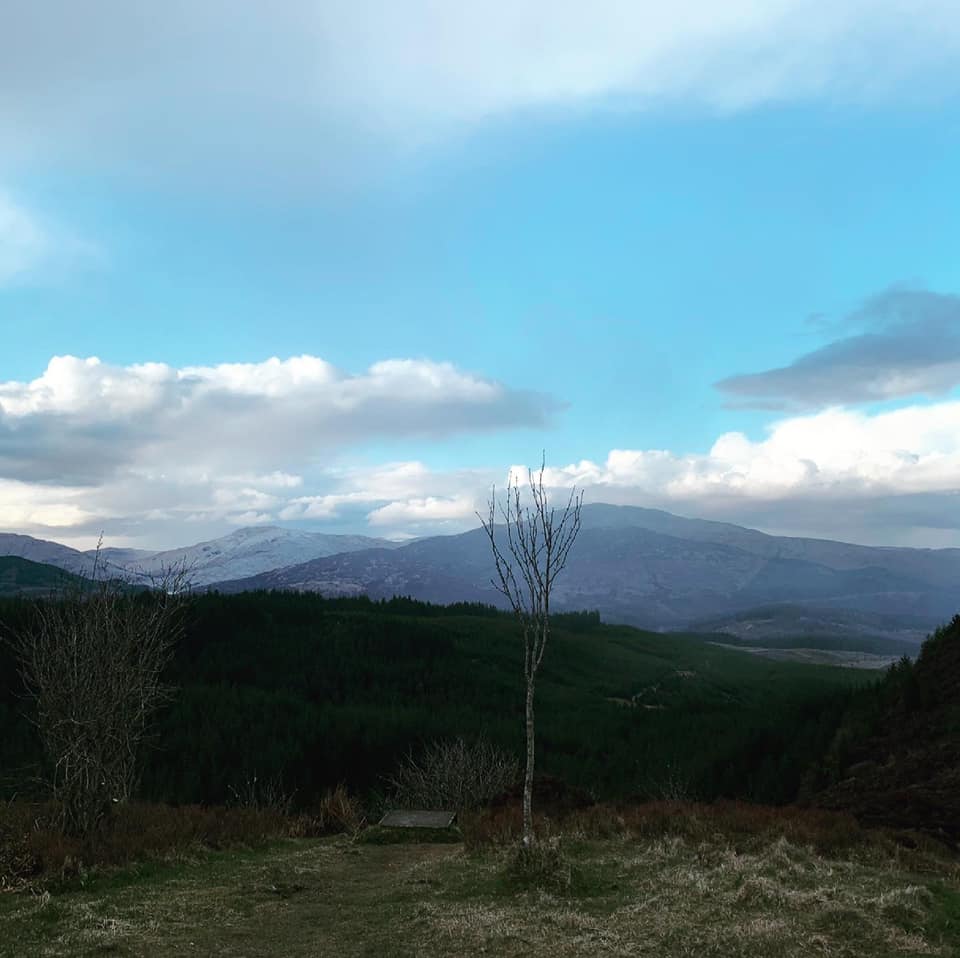 Yesterday, I told the story of how I set off for a hill called Craigmore, but ended up Limecraig. That was Sunday, so on Monday I took Olive out again, this time to bark up the right Craig.

Off we trotted down the Aberfoyle cycle track. Olive is such a good dog. I clipped her onto my backpack and she ran alongside the whole way. Once we got to The Lodge (great spot for a cappuccino), I saw where I’d made my mistake. The path which snaked down toward the river was not the way to Craigmore. The sneaky little path which began on the OTHER SIDE of the main road was where I was headed.

Excitedly we set off to the summit. We wove through beautiful old oak trees just starting to bud. An oak forest has a kind of Robin Hood feel to it – lovely for a picnic. As we climbed higher, the path broke out over the treeline to reveal a breathtaking view over the campsies. It wrapped round the hill and started up the steep final ascent. As we reached the summit, the view of Ben Lomond took even more of our breath away. Either that or I was having an asthma attack.

It’s easy to tick off a goal and focus on the next thing, but instead we sat to take it all in. Olive enjoyed a treat, while I sipped on my water and crunched an apple. The sun was slowly setting behind the hill, colouring Loch Ard with purples and oranges and greys.

“ ‘Twas there that we parted in yon shady glen

On the steep sides of Ben Lomond

Where in purple hue the Highland hills we view

And the moon glints out in the gloamin

Where me and my true love will never meet again

On the bonnie bonnie banks of Loch Lomond”

Ben Lomond was bonnie indeed that evening. What a spectacular country we live in, especially in the sun. Even if you’re not coming to Dreamcatcher Cabins, you can park in Aberfoyle and make your way up Craigmore from there. It’s a stunning walk.