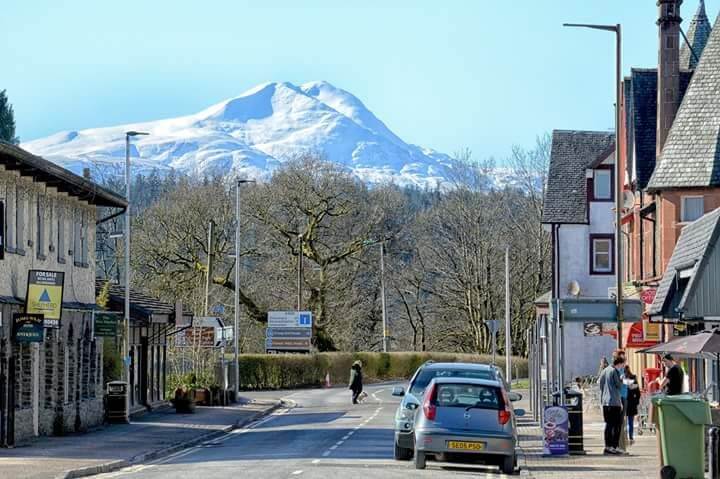 Aberfoyle: Gateway to The Trossachs

Nestled at the foot of Craigmore, the village street is lined with artisan shops, cosy pubs and delicious eateries. Spend the day hiking to the top of Craigmore to soak in the incredible views. The cosy pubs await below to quench your thirst with some of the locally brewed beers and ales. The Forth Inn and Faerie Tree boast varied yet affordable menus for the hungry hiker!

Or take a leisurely drive along Aberfoyle main street and continue on to Loch Ard. A small, winding road which hugs the River Forth and slowly expands into Loch Ard itself. Here you can rent kayaks, boats, or enjoy some quiet fishing as the waves lap softly on the shore. Loch Ard is the source of the river Forth (which runs all the way to Edinburgh!) and is one of Scotland’s most picturesque ochs. Its ideal for any water sports that may take your fancy and is also surrounded by miles of breathtaking mountain bike and walking trails.

Aberfoyle is steeped in rich Scottish history with ties to figures like Rob Roy MacGregor and Mary Queen of Scots. Rob Roy was born at the head of Loch Katrine, a nearby loch. His notorious cattle-rustling exploits often brought him into the village of Aberfoyle. Mary Queen of Scots also regularly visited Inchmahome Priory (just 5 minutes outside of Aberfoyle) as a child and during her reign as Queen and when in hiding from the English army!

The village plays host to shows of sheep shearing and sheepdog trials which entertain the tourists and locals alike. Aberfoyle Golf course, established in 1890, is also one of the most scenic in Scotland.

Aberfoyle wouldn’t be a real Scottish village without its share of local folklore to go with it. It is from this folklore that The Faerie Tree Inn takes its name. Reverend Robert Kirk of the Aberfoyle parish was known for his book “The Secret Commonwealth of Elves, Fauns, and Fairies”. Born in 1644, Kirk had long been researching fairies. His book collected several personal accounts and stories of folk who claimed to have encountered them. He said that Doon Hill (a local hill in Aberfoyle) held within it the passageway to the ‘Commonwealth’ and the land of Faeries. Not long after writing his book, Kirk died under very unusual circumstances. Some reports say he suddenly collapsed after claiming to have been held captive by the Faeries, others say he vanished altogether. People still to this day claim the huge pine tree that still stands at the top of Doon Hill contains Kirk’s imprisoned spirit: the Faerie Tree…

Looking for a place to stay while visiting Aberfoyle? Take a look at our unique and luxury log cabins in the forest. The perfect base to explore Aberfoyle and the wider Loch Lomond and Trossachs National Park!